Meaning:
An agreement between enemies or opponents to stop fighting, arguing, etc., for a certain period of time.
Temporary cessation of something unpleasant.

UP IN THE AIR 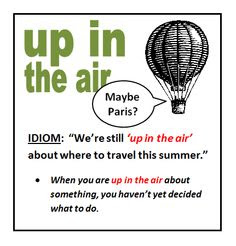 Usage:
Let’s leave this question up in the air until next week.
We have no idea which school she’ll be attending in September – everything is still up in the air.
I don’t know what Sally plans to do. Things were sort of up in the air the last time we talked.